(WACO) – Kacy Crook is one for proving people wrong.

“I wanted to do welding in high school,” said Crook, 20, of Tyler and a recent graduate of Texas State Technical College. “My teacher said I could do it. I welded and cut one thing, and then he put me on the plasma table.”

Crook graduated Aug. 18 with an Associate of Applied Science degree in Welding Technology at TSTC in Waco. She walked across the stage at the Waco Convention Center with more than 500 students from the Waco, North Texas and Williamson County campuses.

“I can’t believe it’s over,” she said. “It’s a bittersweet moment. I wanted to shoot for the extra. I didn’t want to do the bare minimum.”

“This program isn’t for everyone,” said Mark Watson, a TSTC Welding Technology instructor. “The young ladies that make it through this program are extraordinary with great work ethics.”

Crook said her first two weeks at TSTC in fall 2015 had class difficulties that made her cry and question her confidence. But she credited Watson for encouraging her to calm down and listen to music on headphones as she welded.

“The faculty have become family,” Crook said. “They are here for you, welding or not.”

“She told me to not be afraid of the opportunities and to not give up no matter what,” Crook said.

Crook’s career goal is to do pipeline work.

Crook worked two jobs and took dance lessons while she was a student at Bullard High School, where she graduated in 2015. 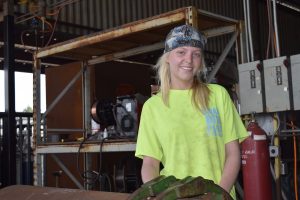