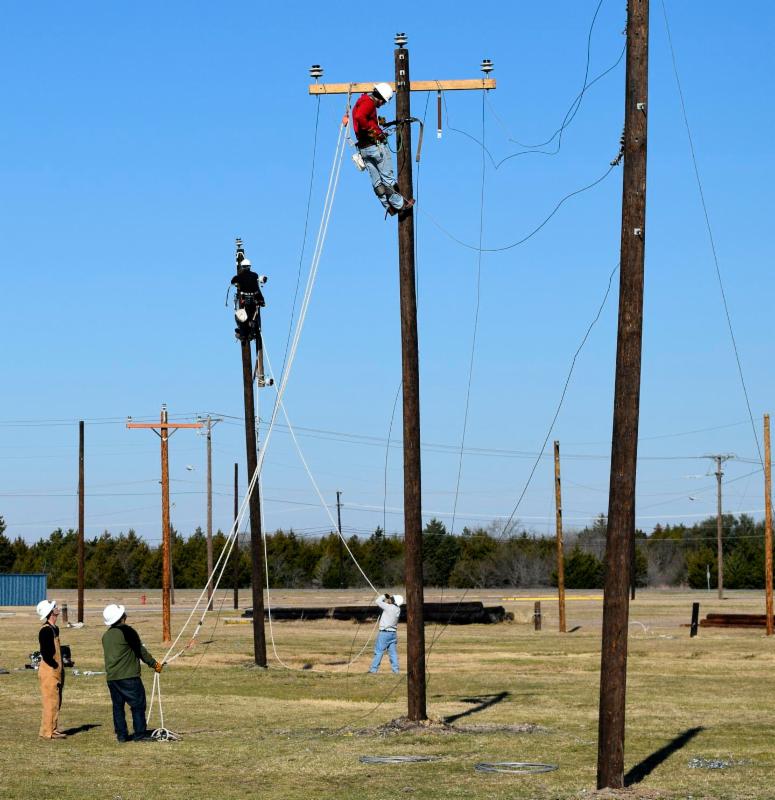 (MARSHALL) – Electrical lineworkers are some of the first people to respond to emergencies, such as downed power lines from hurricanes and ice storms.

Scott Buckelew, an Electrical Lineworker Technology instructor at Texas State Technical College, said he has been encouraged by the need for employees with the recent hiring of nine program graduate by AEP.

“Every county basically has a co-op that has roughly 15 to 20 men working for the electrical office,” he said.

Buckelew worked 25 years in various positions at Brazos Electric Power Cooperative Inc. in Waco before making a career change to teaching. He began job shadowing at the college last November and is now teaching his first full semester.

“I like to show the students what is going on and that I got something out of it,” Buckelew said.

Students can earn a certificate and associate degree in Electrical Lineworker Technology at TSTC in Marshall. The Marshall program currently has more than 30 students.

Texas employs the highest number of electrical lineworkers in the country. The hourly mean wage for Texas workers is $26.19 with the annual mean wage at $54,470, according to May 2014 statistics from the U.S. Bureau of Labor Statistics. In Texas, electrical lineworker jobs are expected to rise 24 percent by 2022.

“The job market is great for lineworkers,” said Robert Mitchell, an instructor in the Electrical Lineworker Technology program. “The baby boomers are retiring and companies across the state are needing trained linemen.”

Some of the qualities needed to do the work include the ability to be mentally tough when working in the elements and at heights as well as the stamina to balance on the side of a pole for periods of time.

“Students who like the outdoors and who are physically capable of performing manual labor in all kinds of extreme weather are geared to our program,” Mitchell said. “Climbing a pole and building power lines is a challenge which our students look forward to. We sometimes start our labs at 4 a.m. so the students can get accustomed to working at night and in the dark. Linework is a 24/7 operation and we prepare students for the real world.”

Tyler Kussad, 19, of Lexington is scheduled to graduate this spring with a certificate in Electrical Lineworker Technology. He said he has already accepted a job that is being held for him at an area electric cooperative.

Kussad enjoys working with his hands and climbing to the top of the electric poles at TSTC’s outdoor lab in Waco. He said he also likes driving the program’s boom truck.

“This program is not as expensive as others,” Kussad said “I like it a lot. We have good instructors and I’ve learned a lot since I have been here.”

Patrick Rayson, 21, of Temple is scheduled to graduate with a certificate in the fall. He said he became interested in electrical line work when he watched a transformer be changed out at his father’s house.

He wanted to pursue an outdoor career and hopes to get hired by an electrical company in Waco after graduation.

The Marshall program currently has one automatic boom truck that students use to prepare for the commercial driver’s license test.