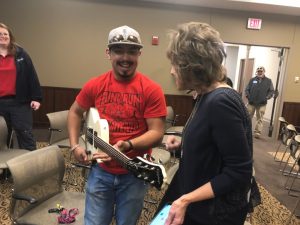 (SWEETWATER) – In the wake of the Bluebonnet Inn dorm fire at Texas State Technical College in Sweetwater, one student had a special request. Isaiah Ornelaz, an Automotive Technology student and avid guitar player, just wanted his guitar replaced.

When TSTC employees heard of the request, Rene Ralston, TSTC’s director of Dual Enrollment programs, made a post on her personal Facebook page, asking if anyone might have a guitar they would be willing to donate. She soon had a response.

Maggie Dickey, owner of Sweetwater Performing Arts Center and wife of the late David Dickey, bassist of the band America, told Ralston she might have a guitar for Ornelaz.

“When we asked Maggie if she was sure she wanted to do this, her answer was, ‘electric or acoustic?,’” Ralston said. “Maggie took the guitar to Abilene on Saturday, had new strings put on it, had it tuned and bought Isaiah a new guitar case.”

Ornelaz said he mentioned the guitar in conversation with TSTC employees he talks to often.

“I talk to them a lot, so they knew I play the guitar,” he said. “When the fire happened, I was like, ‘Aw, I lost my guitar,’ and later they asked me if I had an electric or acoustic.”

The guitar was presented to Ornelaz on Monday at a gathering TSTC Chancellor Mike Reeser held to speak to the students affected by the fire.

“I’m a guitar player, too, and I want you to know that if I lost one of my guitars in a fire, I would really be upset,” Reeser told Ornelaz. “I happened to hear this morning that there are some employees trying to make sure you get your guitar. I knew David Dickey, and he’s quite literally a rock star. He’s the real deal.”

Ornelaz was shocked to receive the gift.

“I was pretty surprised,” he said. “I just thought he knew I played guitar and was talking about it, and then they showed up with a guitar.”

He wasted no time in playing and even looked up music by America, whose music he hadn’t previously heard.

“I played it all last night. It’s awesome,” he said. “I looked up some songs [by America.] They’re pretty good. I’ll listen to them quite a bit now.”

David Dickey, a Sweetwater resident since 1996, joined America in 1972. The band produced hits like “A Horse with No Name,” “Ventura Highway,” “Hat Trick” and “Sister Golden Hair.”

In all, 28 students were left without their belongings because of the dorm fire. The college and the community have rallied together to recoup the students’ lost items and necessities like clothing and books.

Those interested in donating to the students can give to the Sweetwater Fire Emergency Relief Fund at foundation.tstc.edu.