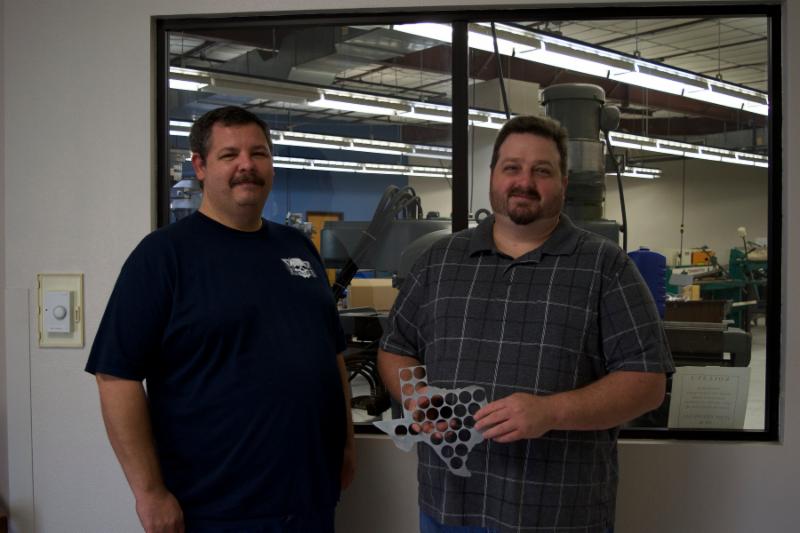 Daniel Nixon, left, and and Nathan Cleveland, right, Computer Aided Manufacturing instructors at Texas State Technical College in Marshall, show one of the jalapeno popper grills they made to help student-veterans.

The handiwork of machining instructors Daniel Nixon and Nathan Cleveland was recently on display at Marshall’s FireAnt Festival. The grills are shaped like the state of Texas and can be used to stuff peppers with cheese and wrap with bacon and cook on a grill or in the oven, Nixon said.

“It was just the right thing to do since these men and women have sacrificed a lot for our country and anything we can do to support them is just what we want to do,” Nixon said.

Stesha Colby, TSTC’s Veterans Program Office at the Marshall and North Texas campuses, was familiar with Nixon and Cleveland’s work.

“They had made some grills before I was an employee here,” Colby said. “Folks liked them and they had them in the bookstore. When we were doing a fundraiser brainstorming session, a co-worker suggested asking them. I approached them to help out and they said yes.”

Nixon said he and Cleveland can weld 30 grills in four hours.

People who want to learn more about the jalapeno grills can contact Colby at stesha.colby@tstc.edu.

“I attended the conference as a student when I was in college,” Colby said. “I liked the networking, the breakout sessions for various groups such as female veterans, veterans at two-year colleges, four-year colleges, private colleges, STEM colleges.”