Rick Denbow, provost of TSTC in Abilene, Breckenridge, Brownwood and Sweetwater, began the ceremony with a tribute to TSTC President Emeritus Homer K. Taylor of Sweetwater, who died earlier in the day at age 83.

“He would be extremely happy for you to celebrate the success of the students,” Denbow told the audience.

Texas Rep. Stan Lambert, R-Abilene, was the keynote speaker. He told those gathered about his first job as a 9-year-old washing windshields at his father’s full-service filling station. He said it was a great experience in public relations.

“You can’t replace kindness in the world,” Lambert said.

Lambert said for graduates to be successful, they need to do four things: have something to do, someone to love, something to believe in and something to hope for.

“What do you hope is the next chapter in life?” Lambert asked the graduates.

Lambert advised graduates to be honest, read the Bible, do the right things in life, have a good attitude and not to hold grudges.

“It’s important at this time to have a positive attitude,” he said.

Lambert said he admired how West Texas residents came together for the TSTC in Sweetwater students affected by the Bluebonnet Inn dormitory fire earlier this year.

Johnathan McCarthy, 28, of Abilene graduated with an Associate of Applied Science degree in Wind Energy Technology. He is already working as a wind technician at Invenergy LLC in Nolan.

“I got out of the Marine Corps and needed an exciting job that is stable,” McCarthy said. “Wind Energy Technology was new and different, but I knew I could do it.”

Some graduates are job searching.

Cameron Hartgraves, 26, of Abilene was a Phi Theta Kappa graduate who earned an Associate of Applied Science degree in Computer Networking and Systems Administration. He wants to stay in the area for employment.

But, this was not Hartgraves’ first college graduation. He already has a bachelor’s degree in psychology from Hardin-Simmons University.

“I more or less figured out that I could fix computers better than people,” he said.

Earlier in the day, the ADN Pinning Ceremony for TSTC in Sweetwater nursing graduates took place at an Abilene church. 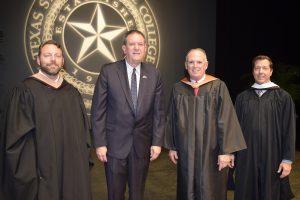