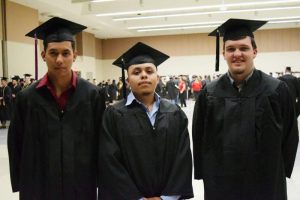 “I’ve probably been to 55 ceremonies over my 18 years, and I’ve never been center stage, so I’m excited for that opportunity,” Balch said. “We have 19 for North Texas, so we’ll get to see them cross the stage.”

Balch said he’s proud of those graduating and the milestone they’ve reached.

Guillermo Herrera earned a certificate in Diesel Equipment Technology but plans to continue his education at TSTC.

“I’m going back to TSTC in North Texas to study welding,” Herrera said. “Diesel involves a lot of welding – they kind of go hand in hand, so that’s why I chose welding. I’m very excited to be graduating.”

“There’s a company there that works on transmissions,” Zepeda said. “My dad is a mechanic, so I got some experience from him. I grew up as a mechanic’s helper, so I wanted to do the same thing. It feels pretty good to reach this step.”

“It feels good,” he said. “I’m still working on lining up a job, but I think I learned 95 percent of what I’ll need to know for the job. I’m sure there’s some things only experience will teach you.”