(SWEETWATER) – Patricia Carpio is one of the first people prospective students meet when they start the registration process at Texas State Technical College.

Carpio, 46, is a support services specialist who administers the Texas Success Initiative Assessment to determine students are ready to start regular classes. She also proctors nursing and automotive technology tests, along with midterm and final exams.

“I am the contact for all four West Texas campuses for testing issues,” Carpio said.

“I love coming to work each day because I feel like I play a small part in so many students’ lives by getting them started on their paths to their future,” Carpio said. “I get to know the students in the beginning, and when I see them at the end when they are graduating, it gives me happiness knowing that they have accomplished something so important to them.”

Carpio was recently named a TSTC Chancellor’s Excellence Award recipient for her contributions to the technical college. She was the only employee from TSTC’s four West Texas campuses to receive the honor. She and 15 other TSTC employees statewide will be honored later this month at the National Institute for Staff and Organization Development awards dinner and celebration in Austin.

“I was like ‘Oh my gosh, I’ve never gotten an award like this,’” Carpio said of her first reaction to learning she was a recipient. “I was in shock. I am so blessed to work with such great people.”

Some of the people in the Sears Building where Carpio works commended her helpfulness, caring and outgoing personality.

“I need to learn pointers from her because she is so friendly with everyone,” said Irma Ortiz, TSTC’s curriculum specialist. “She gets along well with anybody. She can always strike up a conversation with any student to make them feel at home.”

“She is the best,” Rhoades said. “She is really good at talking to them. She has a great way of putting a positive spin on things when students may not have done well on the tests. She is good with positive reinforcement.”

“TSTC gives so many people the opportunity to further their education and to achieve a goal that some think is not within their reach, but what they don’t realize is that TSTC is the portal to their future career,” she said.

The Chancellor’s Excellence Award began in 2001 and has been given to about 300 statewide TSTC employees. Recipients are nominated by their peers for their work toward advancing the technical college’s mission. 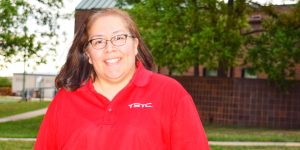