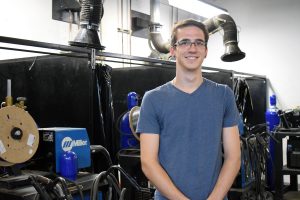 (HUTTO) – When Brandon Cernosek began attending the welding program at Texas State Technical College in Waco, a teaching job was the last thing on his mind.

But while going through the program, he drew inspiration from his welding instructor. As a result, Cernosek recently began teaching welding at TSTC in Williamson County.

“One of the teachers, when I was going to school, was a really good teacher,” Cernosek said. “He was one of those guys you wanted to be around and just listen to because he was always in a good mood with a positive attitude. He just made you want to come to class and learn. That’s the type of teacher I wanted to be.”

Cernosek graduated from TSTC in 2016. Later the Cedar Park resident worked in the welding industry before going to work for the college.

“I worked at Fast Lane Metalworks (in Waco),” Cernosek said. “It was a custom fabrication shop. People would come in and just tell us something they dreamt up that nobody else had, so we’d figure out how to make it. That was a lot of fun. Then I did some more industrial work.”

His love for welding began when he was in high school.

“It was just something that seemed so awesome,” Cernosek said. “You could just make things out of metal and do whatever you wanted with it. Cut here, add it there and, I don’t know, I just fell in love with how it feels when you’re under the hood. I can do a good TIG weld and come out happy. I just like doing it.”

Coming in as a new instructor, Cernosek worried that the students wouldn’t accept him.

“I thought the students weren’t going to respond very well to a young person coming in and trying to help them, but they actually responded really well,” he said. “I’m not trying to be a know-it-all or anything. I’m just trying to help out. They seem to take to it really well, and that feeling itself is really rewarding.”

TSTC Provost Edgar Padilla said he is happy to welcome Cernosek to the team.

“We are excited to see our welding program growing and always feel privileged to have a TSTC grad return from industry to teach our next generation of welders,” Padilla said. “Brandon is a great addition to the Williamson County family.”

Cernosek hopes that passing on his skills will help fuel the workforce.

TSTC prides itself on being “a great place to work” and is currently hiring for positions at its 10 campuses statewide. For information on open positions at TSTC, visit tstc.edu/about/employment.