Rick Denbow, provost of TSTC in Abilene, Breckenridge, Brownwood and Sweetwater, said the night was a time to celebrate.

“For the graduates, tonight is an achievement,” Denbow said. “The sacrifices you made to get homework and tests done and being experts at time management was all worth it.”

Guest speaker Samuel Garcia, owner and operator of Samuel Garcia State Farm Insurance and a board member at Workforce Solutions of West Central Texas, said he was a fan of TSTC’s mission.

Garcia told graduates to think about others who have not experienced higher education. He told them to value the certificates and associate degrees they were receiving.

“Tonight is about you,” Garcia said. “Tomorrow is about you talking about what education can do for a person.”

Some graduates will continue on with their education.

Devan Moore, 30, of Abilene is a U.S. Army veteran who received a certificate in Wind Energy Technology from TSTC in Sweetwater.

“I want to say that it is a sense of accomplishment,” he said. “The best times were when I was up-tower in a wind turbine and applying what I learned.”

Moore will be one of the first students in the new Industrial Maintenance Technology program starting this fall at TSTC in Abilene.

Some graduates already have jobs.

Pamela Hermosillo, 21, of Breckenridge earned an Associate of Applied Science degree in Chemical Dependency Counseling from TSTC in Breckenridge.

She has been hired to work at the Walker Sayle Unit, part of the Texas Department of Criminal Justice. Hermosillo also did her practicum at the prison.

“You learn a lot from the inmates,” she said. “You understand what they are doing in their addictions to drugs and alcohol.”

Some graduates are continuing their job hunt.

Robert Wiley, 24, of Abilene received an Associate of Applied Science degree in Computer Networking and Systems Administration from TSTC in Abilene.

“I enjoyed being around other students pursuing their career goals,” he said.

Wiley had several people in attendance at the graduation ceremony, including his parents and members of his church congregation.

Luis Rueda, 20, of Colorado City received a certificate in Welding Technology from TSTC in Sweetwater. He earned dual credit through TSTC when he was a student at Colorado High School in Colorado City.

“My brother started welding a lot,” Rueda said. “When he talked to me about it and said it was cool, that caught my attention and I just got into it.”

Rueda said he wants to get a welding job in the Midland-Odessa area.

Caydon Vara, 19, of Brownwood received an Associate of Applied Science degree in Emergency Medical Technology from TSTC in Brownwood.

Earlier in the day, the Associate Degree in Nursing Pinning Ceremony for TSTC in Sweetwater nursing graduates took place at an Abilene church. 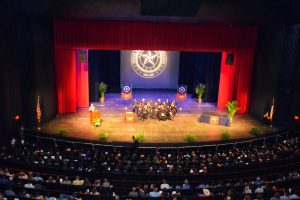