“TSTC’s story is so easy to talk about,” said Kennedy. “And in my position I have the great opportunity to help develop something special for Fort Bend County that will be here for generations to come.”

Kennedy’s hospitality and golf career spanned 24 years before he came to TSTC. Kennedy earned his Bachelor of Arts from Southern Methodist University in communications and immediately after graduation landed a job as an assistant golf pro.

“I enjoyed playing golf with my dad growing up and unfortunately he passed away before he could see me graduate from college,” said Kennedy. “Every time I play I have such fond memories of him, so I took it on as a career endeavor.”

Working his way up the ladder, Kennedy eventually became a general manager, working in country clubs from Texas to California, managing properties, staff, memberships and providing excellent customer service and experiences for members and guests. 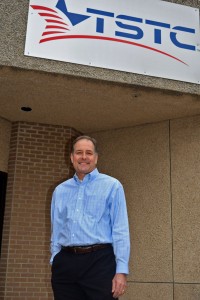 t he was being called for something bigger. In 2013, he received his Masters of Arts in Theology with a concentration in Pastoral Studies from the University of St. Thomas and became an ordained Roman Catholic Deacon.

“This was my calling,” said Kennedy. “The formation process was nearly seven years, but I kept an open mind. It’s a life of service.”

Kennedy just celebrated his three-year anniversary serving as a deacon. He is assigned to St. Theresa’s Catholic Church in Sugarland, and the Office of the Diaconate for the Archdiocese of Galveston and Houston.

In the summer of 2014, Kennedy was still working in the golf industry, but was introduced to an opportunity with TSTC that peaked his interest.  After a tour of TSTC’s Waco campus, he knew this was his chance to help create a college that would help his community become a better place. So, in October 2014, Kennedy left his career in golf and hospitality behind for a new adventure with TSTC.

“Having a place like TSTC in our own backyard is something that is going to changes people’s lives,” said Kennedy. “This opens up the opportunity of education. It’s a game changer for many, even the industry. Our job is to close the skills gap.”

Kennedy said he is ready to focus on the task at hand and that is to establish partnerships between the college and community entities, enroll students for the fall semester and find scholarship money to help students.

“The faculty and staff we already have in place here at Fort Bend are ready to welcome in new employees and get into our new building,” said Kennedy. “We all have the same goal and that is to increase the footprint of TSTC in the county and place more Texans in great paying jobs.”

For more information regarding donating to scholarships funds or partnership opportunities, you can reach Kennedy at 832-447-1473.