Sullivan is expected to graduate this fall from TSTC in Sweetwater with an associate degree in Wind Energy Technology and has already accepted a job with Koenig & Bauer, the oldest functioning printing press manufacturer in the world. She will complete her apprenticeship in Germany for two six-month terms, then train with a technician in Dallas for three months until being upgraded to a technician job herself.

“This is an amazing opportunity,” Sullivan said. “I am so excited to travel and learn more about the culture and lifestyle in Germany, all while doing something I’m genuinely interested in.”

Although this is not the path Sullivan ever expected to be on, she is not looking back.

“I did the traditional four-year college, how ‘society’ expects you to, and I couldn’t find a job I liked,” Sullivan said. “So after a year of job searching, I decided I needed something different and came to TSTC.”

Sullivan completed her bachelor’s degree at Tarleton State University, but after having trouble finding a job she was interested in, she took some inspiration from her hometown and made a change.

“I’m from Dumas in North Texas, where there are tons of wind turbines,” Sullivan said. “They’re fascinating to me. So I did some research, and TSTC popped up with the right program.”

Upon arriving at TSTC, Sullivan immediately impressed her instructors with her drive and dedication to education. Wind Energy Technology instructor Billie Jones taught Sullivan in at least one class each semester and recognized her ambition.

“There is nothing Kaitlin can’t do once she dedicates her mind to it,” Jones said. “One of the first things she said to me was that she was in competition with everyone else, just that no one knew it yet. I believe it was that mentality and her willingness to learn that got her where she is today.”

“Kaitlin is a great leader and very willing to learn. She doesn’t like not knowing,” Rendon said. “She will be a huge asset wherever she works, and I think she’ll do amazing things.”

For anyone hesitant to take the alternative route from a four-year degree, Sullivan says don’t be afraid.

“People told me I shouldn’t or couldn’t do it,” Sullivan said. “And I’m glad I didn’t listen because I got this job offer two semesters before graduation. Don’t let them tell you you can’t, and if they do, prove them wrong.”

Sullivan is expected to graduate on Monday, December 10, at 7 p.m. in the Abilene Convention Center. 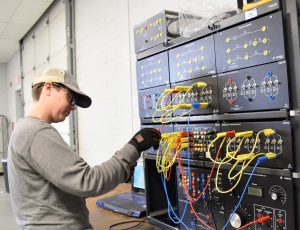