(WACO) – Blake Cole grew up reading automotive magazines and at 10 could eagerly recite facts about cars to anyone who would listen.

As he grew up and began working, Cole also developed interests in accounting, fashion merchandising and restaurants.

The 2003 Midway High School alumnus said his life became focused when he enrolled at Texas State Technical College and began taking classes in the Auto Collision and Management Technology program. He received an associate degree in 2008.

“Once I went to TSTC, everything stuck,” he said.

After graduation, he worked at L3 ISR Systems in Waco painting airplanes and later moved to Missouri to work in the auto collision field.

“Just knowing I had learned something and could use it was helpful and a good feeling,” said Cole, now 34.

Cole’s being hired at Service King brought him back to Texas. He is currently the general manager at the Leander location.

Cole said he has seen an employment gap develop between workers in their 20s and those in their 40s and older who have been in the auto collision industry for several years. As these workers age and retire, new employees are needed to fill positions.

Clint Campbell, TSTC’s statewide department chair for Auto Collision and Management Technology, said there are goals for increasing the number of students studying in the program.

“We need to be getting our faces in front of these high school students, probably sophomores and up,” Campbell said.

The number of automotive body and glass repairers is expected to grow to about 195,000 jobs nationally by 2026, according to the U.S. Bureau of Labor Statistics. Cole said the auto collision industry also needs people with electrical, welding and computer programming and networking experience.

James McGee, 35, of Austin was hired by Service King in February and placed in its apprenticeship program. He received an associate degree from TSTC’s Auto Collision and Management Technology program in 2010.

“Get in as early as possible if that’s what you want to do,” McGee said about making a career choice. “Shadow as many people as you want.”

McGee already had some industry knowledge, having worked at small body shops,but said he was glad to learn about pulling techniques and heavy collision work through Service King’s new hire initiative.

“Our job is mainly to problem-solve,” McGee said. “I like the people, and I like to fix things. I like the sense of accomplishment when it’s done. The field will drive you crazy at times and make you head-over-heels excited at other times.”

Cole said employees complete work certifications through the Inter-Industry Conference on Auto Collision Repair, or I-CAR, which provides training in all branches of the auto collision and management industry.

Vincent James, 25, of Leander is a Service King technician who works primarily on tearing vehicles down early in the repair process. He is a 2015 graduate of TSTC’s Auto Collision and Management Technology program.

“I like cars, and I like art. So I thought about auto collision as the melding of the two,” James said. “I was extremely hooked on it. There is something about body work that drew me into it.”

Robert Castaneda, 29, of Jarrell graduated with an associate degree in 2012 from TSTC’s Auto Collision and Management Technology program.

He said wrecks caused by bad weather tend to mean that he and his co-workers stay busy. He said the rise in aluminum exteriors will mean more training and adaptation for workers in the future.

“I’m doing it until my body won’t let me do it anymore,” Castaneda said about his work. “Always listen and pay attention. There is more than one way to do things.” 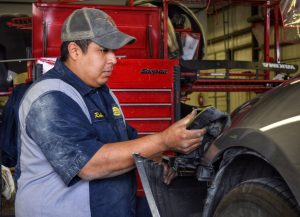