(MARSHALL) – Chastity Rhodes is going for her own triple crown at Texas State Technical College.

Rhodes, 33, of Marshall will receive associate degrees in Computer Networking and Security Technology and Cyber Security at the college’s Spring Commencement at 6 p.m. Friday at Julius S. Scott Sr. Chapel at Wiley College.

She already graduated with an associate degree in Biomedical Equipment Technology in 2014 at TSTC.

“I want to make sure I have a wide range of skills to make money for me and my children,” Rhodes said.

Rhodes discovered an interest in network support when she took networking classes for the Biomedical Equipment Technology degree.

“I kind of always wanted to work in a hospital setting but I’m not the nurse type,” she said. “I’m a very technical and analytical person. When I heard about this degree plan that lets you work on medical machines and networking in hospitals and you have to do a lot of security with HIPA (Health Information Privacy Act) too, it was everything I wanted actually.”

Alan Towery, an instructor in the Cyber Security program, said Rhodes was one of the hardest working students he has had.

“She would come up here to campus as much as she could to get help and even when she was not in class,” he said. “She was always asking questions to understand the material more.”

Towery said TSTC in Marshall’s cyber security graduates have gone on to work for school districts, hospitals and communication companies since the program began in the 2011-12 academic year.

Rhodes has been moved up from an internship to full-time employee at Seven Networks LLC in Marshall. Her internship involved server room network administration, cyber security work and network monitoring.

“The only way I have gotten to where I am at is to push myself and not be completely satisfied and work to do better,” she said. “My hopes are to keep this job and grow with this company and get tons of experience and exposure and hopefully have this real awesome career.”

She said she wanted to be an inspiration to younger females to pursue networking and technology as a career.

“I got into biomedical and the other two programs because they are predominately male. That to me is a challenge,” she said. “If they can do it, I can do it. If I would give any advice to any young lady coming out of high school, it is if you are good at mathematics, science, computers and even if you just like that kind of stuff, get involved and do something with your brain. In the end, your brain is going to be the only thing that matters. It’s an exciting field and there are advantages to females being in the IT field or any technology field.”

She visited TSTC when she came to the realization six years ago that a college degree was a necessity. She has appreciated the encouragement that faculty members gave her to succeed.

Her future academic plans include earning bachelor’s and master’s degrees. 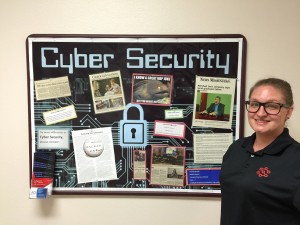