(WACO) – Two students at Texas State Technical College in Waco won gold medals at SkillsUSA’s National Leadership and Skills Conference last week in Louisville, Kentucky.
Marcus Crespin, 20, of Victoria placed first in Residential Systems Installation and Maintenance and Christian Riestra, 20, of Lacy-Lakeview topped in Computer Programming.
“I am proud of our TSTC students,” said James Matus, a Computer Maintenance Technology program director and SkillsUSA assistant campus coordinator. “They competed to the best of their abilities and represented the college well at the national conference.”
The students continued TSTC’s tradition of garnering medals at the SkillsUSA gathering, which brought together more than 6,000 high school and college students nationwide to compete in about 100 contests. TSTC in Waco has won more than 120 gold, silver and bronze medals at nationals.
“We compete and we are confident we will do well year after year,” said Wayne Connally, a Computer Maintenance Technology instructor who traveled with the group to Louisville. “We are proud of our record. The exposure for TSTC is good.”
SkillsUSA is a professional organization teaching technical, academic and employability skills that help college students pursue successful careers. Members build these skills through student-led team meetings, contests, leadership conferences and other activities.
Crespin trained for the seven-hour contest in classes he took this year for a Home Integration certificate as part of the Computer Maintenance Technology program.
“In the competition I had to install a satellite dish and configure a home router and connect it to a camera on the network,” said Crespin, a Computer Maintenance Technology and Computer Networking and Systems Administrator double major. “Then, I had to set up a Google Chromecast and do a customer service talk in front of the judges who pretended to be customers.”
Riestra, 20, is a Computer Science – Business Applications Programming major. He credits learning the foundations of programming from the classes he took while at Connally High School where he graduated in 2013.
Riestra had to make two computer coding programs functional and user friendly for his SkillsUSA contest. There was also an interview and written test.
“This was a piece of cake compared to what my instructors have us do in class,” Riestra said. “We do more complex things.”
Riestra hopes the victory can make him noticed when job hunting. He did some networking between sightseeing and competitions.
“I’m going to put this front and center on my resume,” he said.
And, Riestra encouraged other students to think about computer programming as a career.
“I hope it grows more,” he said. “It is as important as learning mathematics and science. Just the basics of programming is good to know. It is probably five percent mathematics and mostly pure logic. It is like a puzzle.”
Crespin and Riestra both competed in SkillsUSA for the first time.
“The instructors here actually made it seem fun and helpful towards learning things in my field and things that will help me in my career later on,” said Crespin, a 2014 Victoria West High School graduate.
Crespin, Riestra and 38 other TSTC in Waco students qualified for the national competition by placing first in SkillsUSA’s statewide postsecondary competition in early April in Waco. 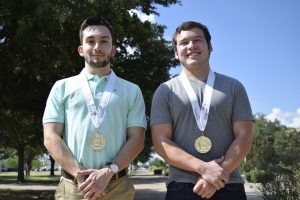