(MARSHALL) – Jeremy Ledbetter’s college education actually began when he was a fourth-grade student at J.H. Moore Elementary School in Marshall.

Ledbetter and his class made a field trip to Texas State Technical College in Marshall. While on campus, the young students visited classrooms and saw learning labs for computers and heavy equipment.

“It had been my first time on a college campus, actually,” Ledbetter, 18, said. “I got there and I was getting interested in what they were showing us, probably because it was new and I had not seen it before. I had always been interested in the computer side of things, even when I was little.”

During their visit, Ledbetter and his classmates each were given something that would prove valuable years later — a $500 voucher to attend TSTC in Marshall. His parents put his voucher in a safe box at their house in Jefferson.

The voucher idea originated with Randall Wooten, former president of TSTC in Marshall and now vice chancellor at TSTC in Fort Bend County. He said at the time he wanted to put the ideas into area fourth- and fifth-grade students’ minds that attending TSTC would make differences in their lives.

He was pleased to hear that Ledbetter and two other students attending for fall semester had turned in vouchers.

“It’s like a dream come true,” Wooten said. “Someone plants a tree or a garden and once the harvest or the fruits of labor start coming in, it gives you a sense of satisfaction. This is a new crop of TSTC students and I’m glad it made a difference.”

“I like figuring out the different parts of computers,” he said. “I know how they work and I have been looking into building my own computer but have not been able to get the parts yet.”

He is the person his family and friends go to when they have computer questions.

“It’s nice to know I can actually help them,” he said.

He had an interest growing up of being an animator, but cyber security also lured as a potential career.

“Cyber security just always sounded interesting to me,” Ledbetter said. “I like the idea of making security-type systems for computers.”

Ledbetter is still formulating a plan for when he graduates from TSTC.

“A bachelor’s degree would be nice – just a good four-year degree is always helpful on the resume,” he said. “But at this point, I am just more concerned with graduating from TSTC and getting a good job, and then I can go back after that.” 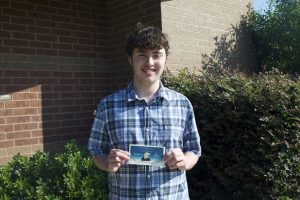