Now he is fulfilling his dream, but for older students as an instructor in the Industrial Maintenance program at Texas State Technical College in Marshall.

He was recently honored as a TSTC Chancellor’s Excellence Award recipient.

“Society is changing so fast because of the impact technology is having in our lives,” TSTC Chancellor and CEO Mike Reeser said. “But the one thing that doesn’t change is the strength of a leader and their character, and the profound impact we have on each other. And that’s why TSTC is a special place and a unique player in Texas.”

Chaney has taught at TSTC in Marshall for four years. The Industrial Maintenance program has about 70 students for the fall semester.

“Edward is clearly one of our top teammates and a great example of a true servant-leader,” TSTC in Marshall Provost Barton Day said. “He is a mentor to students and fellow staff and faculty and a terrific choice for this well-deserved recognition.”

“I got notification about the award from email and that UPS was sending me a package,” Chaney said. “I thought it was spam at first. There was a letter that came from the chancellor. Once I got the envelope and found out what it was, it was a sense of awe because I wasn’t expecting it.”

He joined the U.S. Marine Corps and served for four years as an electrician while stationed at Marine Corps Air Station El Toro in California and Marine Corps Base Hawaii in Kaneohe Bay.

“I would help hook up tent cities in the field and on training missions,” Chaney said.

After leaving the military, he worked in maintenance and production for a tire manufacturer in California before returning to East Texas to work for 16 years at the Goodyear Tire & Rubber Co. plant in Tyler before it closed in 2007.

“When they shut the plant down, I got to come to TSTC in Marshall as a student and did two associate degrees: Industrial Electrical Technology and Industrial Mechanical Technology (later combined to be the Associate of Applied Science degree in Industrial Maintenance).”

After a couple of more jobs, Chaney discovered TSTC in Marshall had a faculty position open.

“I like the fact we change lives and that is what I’m excited about,” he said.

For more information on TSTC, go to tstc.edu. 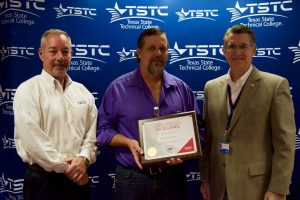