(MARSHALL) – SEVEN Networks and Texas State Technical College in Marshall are proving to be good neighbors.

The mobile device traffic management and analytics company has three TSTC alumni as employees, along with two students as interns. The company is located in TSTC’s Center for Applied Technology, just steps away from the administration building.

“The benefit to us is their students are concentrating on their trade while they are getting educated,” said Keyvan Shahrdar, SEVEN’s director of operations in Marshall. “That’s a great plus for us because we are getting students who are doing the same exact thing that we are wanting to hire.”

“This is great international enterprise experience that Marshall has needed for many years,” said Rhodes, 33. “East Texas is behind in technology terms, and SEVEN provides a doorway to technological advancement for this area. There are great opportunities for graduates from this area who are not in a position to relocate just to have a job.”

The company will soon launch its iPhone Ad Clear platform for the United States. Ad Clear is an advertising blocking application that is already available for Android phones.

“I think that is going to have a major impact in our offices here, with us needing to hire more engineers from the area,” Shahrdar said.

Dustin Morgan, 22, of Jefferson graduated this summer from TSTC in Marshall with an Associate of Applied Science degree in Software Development and is a SEVEN software engineer working on Ad Clear’s Android version.

“The current projects the company has are challenging, and there is always something to learn and improve on,” Morgan said. “It never gets boring or repetitive and is constantly changing. It’s also interesting to see a lot of people use something you are working on, including people you know.”

The company opened its Marshall office in summer 2015. Ross Bott, president and chief executive officer of SEVEN Networks, said the company looked at Texas because some of its senior executives and customers are based in the state.

“We explored a variety of cities in Texas, but our early interactions with the Marshall Economic Development Corp. were so positive that Marshall quickly rose to the top of the list,” Bott said. “The ability to partner with TSTC and other nearby colleges for engineering talent was a second critical factor and ultimately led to our final decision to move to Marshall.”

The Marshall site has 10 employees and one contractor. SEVEN’s workers in Marshall and Hangzhou, China, divide their engineering and feedback workload. 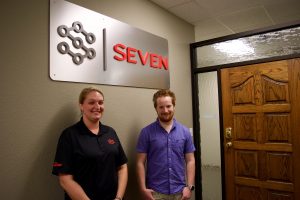