(SWEETWATER, Texas) – The saying goes that all good things come in threes, and Texas State Technical College nursing student Kacee Merrifield hopes that saying will ring true for her.

Merrifield will represent Texas and TSTC for the third time at the SkillsUSA National Leadership and Skills Conference in Louisville, Kentucky, in late June.

A Mineral Wells native, Merrifield is enrolled in the LVN to RN Transition program and working toward an Associate of Applied Science degree. Previously she had earned a Vocational Nursing certificate from TSTC.

During her time at TSTC, Merrifield has competed at SkillsUSA three years in a row, winning state all three times and placing nationally twice.

“It’s a very validating feeling when you get to test your skills against others in your industry. But it’s so much more than just winning a medal,” Merrifield said.

SkillsUSA is a national partnership between students, teachers and industries working together to ensure that America has a skilled workforce.

“I really love SkillsUSA and what it does for me and for others. A big part of being a nurse is people skills, and at SkillsUSA you meet so many people and work with so many different personalities (that) you really get to practice that skill on top of all your other skills,” Merrifield said.

During the Practical Nursing competition, Merrifield will take both a written test and a hands-on test. She will work with a volunteer and perform various tasks.

“We practice everything from medications to vital signs to wound care and even what we would delegate to someone else; it’s a real-world environment,” she said.

With such an impressive record, it is no surprise that her instructors are proud of her.

“Kacee has been a huge success story in the TSTC nursing program,” Taylor said. “She has worked full time, attended classes and helped other contestants prepare for Skills competitions.  It is students with her dedication and work ethic that make teaching at TSTC such an honor.”

Merrifield says the best part of going to SkillsUSA nationals again is the chance to meet more people.

“My favorite thing has to be talking with other nursing students, learning what is different in each state and getting to learn more about this career field. SkillsUSA is really amazing. I really encourage anyone who has the opportunity to go,” Merrifield said.

She is expected to graduate in summer 2019.

For more information about TSTC, log on to tstc.edu. 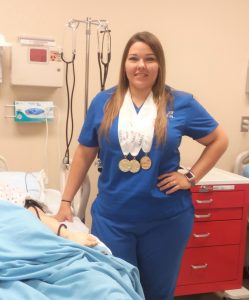 Kacee Merrifield, pictured above, is a three-time state champion in various nursing competitions for SkillsUSA. This year she will compete in Practical Nursing at the SkillsUSA National Leadership and Skills Conference in late June.
#

Phillips, a Big Spring native, is an Army veteran and a Vocational Nursing student at TSTC. He recently competed at the state-level SkillsUSA Postsecondary Leadership and Skills Conference, where he placed first in CPR Skills.

“I’m still kind of surprised I got first place. I wasn’t expecting it, but I was very excited,” Phillips said.

Phillips will represent Texas and TSTC at the SkillsUSA National Leadership and Skills Conference in Louisville, Kentucky, on June 24-28.

Phillips was first introduced to CPR training during his time with the military. He enlisted in the Army in 1999 as a helicopter mechanic before serving in the Army’s Special Forces until 2008.

“We needed to know the basics of medical care and act as a first responder, so we learned CPR skills and other first-responder skills,” he said.

When Phillips is not at school or practicing for SkillsUSA, he is working as a certified nursing assistant at the George H. O’Brien Jr. VA Medical Center in Big Spring.

“It’s a way for me to give back to other veterans but also to be around other nurses and keep learning,” Phillips said.

Phillips stands out to his instructors and classmates not only as an excellent student, but also as the only male in the program.

“Bless his heart. He is the only guy in the class right now, so he’s very protective of the other students and a perfect gentleman. He has been a model student who goes above and beyond. I just can’t say enough good about him,” TSTC vocational nursing instructor Sharon Zetzman-Sparks said.

Being a male nurse is something Phillips knows may be uncommon, but he encourages anyone with a desire to help people to consider the career field.

“It’s something different every day. You keep learning new things, and there is a huge job demand. Being a nurse is very rewarding,” Phillips said.

Phillips is expected to graduate in fall 2019. 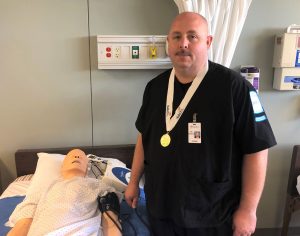 James Phillips III is an Army veteran and vocational nursing student at Texas State Technical College in Sweetwater. He will compete in CPR Skills at the SkillsUSA National Leadership and Skills Conference.