Many of the graduates either have jobs or career offers.

Hobie Horrell, 20, of Edgewood graduated with an associate degree in Diesel Equipment Technology. He described his new job working on diesel equipment at Autoworks Sales and Service in Edgewood as a good opportunity to work in his hometown.

“It feels good to get my life started being that I’m 20,” Horrell said.

Salvador Ceja, 20, of Mansfield said he was excited to receive his associate degree in Diesel Equipment Technology. He will soon start a job at Warner Enterprises Inc. in Dallas.

“It has been awesome at TSTC,” Ceja said. “You get to make some good money in my field.”

Some graduates are still making plans.

Ty Webb, 20, of Corpus Christi graduated with two associate degrees in Instrumentation Technology and Electrical Power and Controls. He chose the fields to study because of his relatives’ work. Webb said his time at TSTC was a challenge but one he enjoyed. The Tuloso-Midway High School graduate said he is job hunting but also thinking about pursuing a bachelor’s degree.

TSTC had more than 900 graduates this fall across the state.

TSTC has graduated more than 100,000 students in its history. 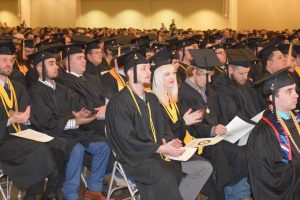