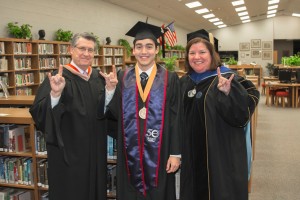 There was nothing ordinary about Anthony McIntosh’s high school career.

From half days to learning time management on his own as a junior, McIntosh took the unconventional route through high school.

But in the end, it paid off and the Early College High School Valedictorian is set to attend the University of Texas in Austin this fall.

“It’s definitely different,” McIntosh said of ECHS. “But I very much enjoyed every aspect of it … from the freedom it gives you, to taking my college courses at TSTC.”

Early College High School students have an opportunity to take dual enrollment courses across the street at TSTC.

Students can choose to enroll in one of the programs offered by TSTC but the majority of students opt for the Academic Core Certificate of Completion, which covers the basic courses students usually take as freshmen and sophomores in college.

McIntosh was one of nearly 450 spring graduates and one of 12 Board of Regent Scholars at TSTC in Harlingen.

“During my junior year I began taking advantage of that freedom,” McIntosh said. “I was able to choose my classes and my professors, like I was in college. Many times I was able to get done early and some days I would be done with school by 12:45 p.m.”

That’s when McIntosh felt he matured and became better prepared for college.

“There were times when I had other projects or homework I had to take care of,” McIntosh said. “But it’s when you don’t have that extra work that you need to learn to manage your time.”

McIntosh plans on majoring in business administration but hasn’t decided if he wants to go to medical school or pursue a Masters of Business Administration.

“I haven’t decided yet,” McIntosh said. “I still have some time.”