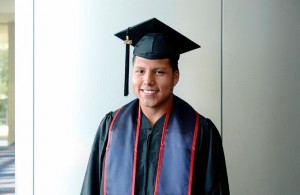 The 19-year-old Ferris native walked across the stage at the TSTC’s Spring Commencement Ceremony in Waco this month to receive a Certificate in Welding.

School and studies have never come easy for Rojas.  He wanted to drop out as far back as junior high school but his parents, immigrants from Mexico who came here to give their children a chance at an education,would not let him.   And, high school was an even bigger challenge.

“I really struggled in high school.  Bookwork and paperwork just wasn’t my thing,” remembers Rojas.  The only thing I liked was FAA and Ag Mechanics.”

Rojas became increasingly frustrated with his academic disappointments. He began to hang around with the wrong crowd and eventually got into some legal trouble.

“During my junior year I got a DWI.  I thought my life was over.  I felt like a real failure,” said Rojas.

But, his parents, his five older siblings and some teachers would not let Rojas give up.  Those educators, aware of the teenager’s hands-on skills, started motivating him to apply to TSTC.

Rojas says when he submitted his welding application he didn’t expect to be accepted.  When he finally became a college student, burdened by low self-esteem and a fear of academic disappointment, he almost dropped out.

“It came to a point that I wanted to give up.  It’s hard.  I didn’t trust myself that I could do it,” said Rojas.

But Rojas’ TSTC instructors believed in him and challenged him to put in the extra time and work needed for him to succeed.

“Edgar is a great student. Yes, he kind of struggled with bookwork but he’s a real quick learner once you show him what is expected,” said Welding Instructor Samuel Elizondo. “(Instructor) Mr. (Mark) Lipscomb and I guided him and mentored him to where he was confident in completing our curriculum.”

Motivated by his instructors, Rojas persevered. Today he says hands-on learning was critical to his success.  The majority of TSTC technologies on the 11 campuses are 60 percent hands-on instruction.  It’s a cornerstone of a TSTC education that makes graduates very valuable to hiring industries in Texas.

“If you like working with your hands, TSTC is for you. I feel really proud of myself,” said Rojas.  “A hundred doors will shut in your face.  But I’ve learned, you only need one door to open and change your life.”

Today, Rojas is focusing on those positive changes and his renewed confidence.  He is presently in the middle of job interviews and remains optimistic that he’ll be joining the workforce in the near future.