(ABILENE) – Shawn Ogden of Clyde wants to continue working in the aircraft industry after discovering the career as a mechanic in the U.S. Air Force.

But, he knew after leaving the military he was missing some of the certifications needed to professionally maintain aircraft.

“Going to college after being in the military can be intimidating and challenging, but it is absolutely worth the effort,” said Ogden, 43, a student at Texas State Technical College in Abilene. “The U.S. Department of Veterans Affairs is extremely helpful when it comes to making sure you have everything you need to complete your education.”

Guiding Ogden through his time at TSTC is Veteran Services, which works with students who were in the military or are current active-duty members, along with their spouses and dependents.

“In the military, in order to make rank and be successful, we have to have education in our background,” said Annette Collins, veteran programs officer at TSTC’s West Texas campuses.

Some of the popular programs that members of Veteran Services like to pursue include Computer Networking and Systems Administration in Abilene and Brownwood, and Nursing and Vocational Nursing in Brownwood, Breckenridge and Sweetwater.

Ogden is part of the TSTC FAST Trac Airframe and Powerplant Program in Abilene that allows active-duty military members and veterans to study in an accelerated 13-week program focused on Federal Aviation Administration curricula. Classes are taught in hangar space at Abilene Regional Airport.

“There are a lot of veterans that come out and have worked on jets and airplanes the whole time in service but they don’t have the FAA airframe and powerplant license,” said Julia Humphrey, director of career services for TSTC’s West Texas campuses. “The program is geared for them to get the license and go to work.”

Ogden said he has felt at home at TSTC and knows he will be competitive and ready for job searching once he completes academic work in December.

“TSTC offers a complete package with hands-on training, which I have never had access to before,” he said.

Veteran Services also brings people together who share experiences no matter what military branch they are affiliated with.

Veterans, their spouses and dependents can work with TSTC’s Career Services and Talent Management staff on career readiness, resume writing, networking and interview skills. The technical college also has hireTSTC, an online resource for students to connect with companies that have job openings tailored to certificate and associate degree programs.

“I like TSTC because of the way they take care of their students,” said Collins, a 24-year U.S. Air Force veteran. “The staff is willing to go above and beyond to help the students get the education they need.”

A lot of TSTC’s student recruitment is focused on Dyess Air Force Base, which has more than 5,000 active-duty and U.S. Department of Defense civilian employees and an economic impact of more than $441 million, according to the Abilene Industrial Foundation. The military installation is also the largest employer in Taylor County.

“A lot of the active-duty personnel ask about their benefits and if their spouses can use the benefits,” Collins said. “Yes, they can.”

TSTC will have Registration Rally events for the fall semester on Aug. 2 in Sweetwater, Aug. 3 in Breckenridge, Aug. 8 in Brownwood and Aug. 11 in Abilene. 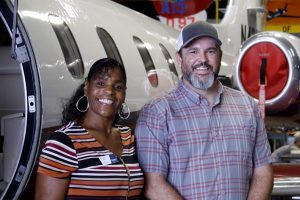