CTEN, which was created in 1994, is disbanding and used remaining operating funds to make the gift to the longtime TSTC scholarship.

“Connectivity could not have helped without TSTC and Lynn,” said Marlene Zipperlen, CTEN’s chairwoman. “It was a collaboration when there weren’t a lot of collaborations going on.”

The scholarship honors the life of Lynn R. Francis, TSTC’s director of network services, who died in a motorcycle accident on Feb. 25, 2001. The scholarship will be available for awarding in fall 2018 for graduating high school seniors in the Axtell, Bruceville-Eddy, Cameron, China Spring, Gholson, Itasca, Mexia and West school districts planning to attend TSTC in Waco, said Karen Beach, director of donor retention for The TSTC Foundation. Students whose parents work for the Hillcrest Baylor Scott and White Hospital, Falls Community Hospital, the Waco-McLennan County Library and the Hillsboro City Library are also eligible, according to information from The TSTC Foundation.

“In the early ‘90s, then-president Don Goodwin called on Lynn Francis, the CMT (Computer Maintenance Technology) graduate and instructor, to develop the TSTC computer network to create a unified system to replace the piecemeal chaos that separated campus PCs,” according to the March 15, 2001 edition of the Tech Times.

Francis was an avid motorcyclist.

“From bikes to bikers, and everyone in between, the people who will miss the soft-spoken, Harley-riding TSTC instructor and director spread from Waco to Denver, Little Rock to San Francisco … and beyond,” according to the Tech Times. 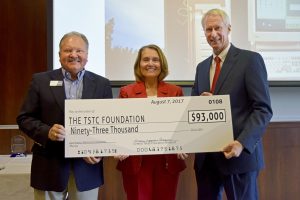