Roughly 30 employers that attended looked for students to fill welding, industrial painting, drafting and other jobs in high demand.

“The event is a good thing,” he said. “These young kids need to look at their options and see what is out there.”

Erika Luneau, director of human resources for Koenig and Bauer in Irving, said she was looking out for students studying electrical and mechanical fields who want to do a one-year apprenticeship in Germany and then work for the company. The German company specializes in making printing presses.

“We have been working with TSTC over the last year,” Luneau said. “We have visited several campuses and like the programs. We like how students learn theory and do hands-on. We need to find someone who is adventurous and is okay with the lifestyle of traveling most of the time.”

Christa Valdivia, 28, a nursing major from Colorado City, said it was her first employment event. She is scheduled to graduate in December.

“I actually was curious about occupational nursing,” she said. “I got some information on civilian nursing. I feel like the job fair gives us a leg up. It’s just for TSTC.”

Heather Kumpe, economic development specialist for the San Angelo Chamber of Commerce, was also representing the San Angelo Regional Manufacturers Alliance. Kumpe had a lot to talk about with students. She said San Angelo has more than 80 manufacturers and a 3.2 percent unemployment rate.

“Our job is to get more companies to come to San Angelo,” Kumpe said. “But, we need the workers. This is the first time we have done a job fair.”

Employees from ONE Gas, a natural gas distribution company with more than two million customers in Kansas, Oklahoma and Texas, brought a mobile telemetry unit used to monitor pressure at oil and gas locations and a field meter set to show students.

Tony Peterson, a foreman for ONE Gas, said he was seeking job candidates to move to the Permian Basin to work.

“Retention is a challenge,” he said.

Some employer tables had TSTC alumni answering questions from students.

Brandi Riley, a registered nurse and outpatient/surgery services manager at Eastland Memorial Hospital in Eastland, graduated in 2017 from TSTC in Sweetwater. She said finding qualified nurses is a challenge.

“Working in a small facility, you know everyone,” Riley said. “I know the names of my patients and co-workers by first name.” 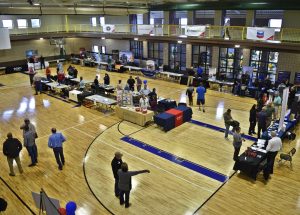