EMA Electromechanics, an international maker of equipment for the clean wind energy sector, has given $150,000 since 2015 for the Sweetwater Veteran’s Funds for College Education. The funds go toward helping veterans completing their technical education at TSTC in Abilene, Breckenridge, Brownwood and Sweetwater.

Two of the scholarship’s recipients said it has helped ease financial worries as they study at TSTC.

Stanley West, 47, of Brownwood is a U.S. Army veteran working on a certificate in Structural Welding at TSTC in Brownwood. He is a member of Phi Theta Kappa and scheduled to graduate in August.

“I’ve been welding for 20- plus years, but I didn’t have a certificate,” West said. “For me, it was learning the language, because I could perform the welds already but did not know what they were called.”

He said the scholarship, along with other funding he is receiving, has been put to good use. The money has enabled him to meet other people through his classes.

“My books alone cost $500,” he said. “I couldn’t afford to go to school because I’m on a fixed income. It’s been a major help and keeps me busy during the week instead of sitting at home and being reclusive.”

West was the fourth of 10 kids raised on a ranch in Cisco and is a 1989 graduate of Cisco High School. He was in the Army National Guard in high school and after graduation went on active duty. He served in Operation Desert Shield and Operation Desert Storm.

The EMA scholarship is also helping Paul Weaver, 43, of Abilene. He is a Computer Networking and Systems Administration major at TSTC in Abilene scheduled to graduate in August.

“It was something I had a higher interest in,” Weaver said. “I taught myself how to build a computer while I was on deployment.”

He said the scholarship has enabled him to learn how to improve wireless connections and technology infrastructure.

“It’s a lot more than I expected, but I have enjoyed everything I have learned,” Weaver said.

Weaver grew up in Florida. He spent roughly 13 years in the U.S. Air Force and was stationed at Dyess Air Force Base and Nellis Air Force Base in Nevada. He also served two deployments in Qatar.

“My wife fell in love with Abilene, so after Las Vegas, we came back here,” Weaver said. “I had been wanting to go back to school. I went back to work as a correctional officer for two years, and then I worked for the post office for two days.”

Weaver went on to work for a call center and then was hired at Lowe’s where he works an overnight shift. After his workday ends, he helps has 14-year-old son get ready for school, goes to classes at TSTC and eventually sleeps when his wife gets home from work at Dyess.

After graduation, Weaver said he wants to stay in the Abilene area and work in information technology. He also wants to work on industry certifications.

EMA Electromechanics was founded in 1952 in Argentina. The company’s VDH Series Vacuum Circuit Breaker was first sold in the United States in 2003. The company began its American operations in 2010 in Sweetwater.

For more information on giving to Texas State Technical College, go to tstc.edu/tstcfoundation/giving. 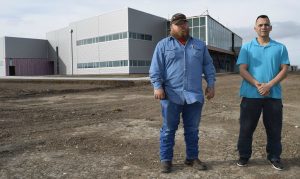