(BROWNWOOD) – Christopher Michael of Comanche worked jobs as a bartender and band tour manager after high school, but he knew he wanted to do more with his life.

The job he had as a volunteer firefighter lit the spark, which led to him to enroll at Texas State Technical College.

“I was looking for something more long-term and stable,” he said.

Michael is a candidate for graduation for the Certificate 2 – Emergency Medical Services Paramedic at Texas State Technical College’s Summer 2018 Commencement on Friday, Aug. 17, at the Abilene Convention Center.

Michael is already a graduate of TSTC, having finished his Certificate 1 – Emergency Medical Services EMT in 2017.

“It’s been amazing,” he said. “The instructors we have here have been helpful inside and outside the classroom. You spend so much time working together that it’s like a family.”

“He is just a wonderful advocate for our program,” she said. “He’s never late, has a 4.0 grade point average, which is not easy in the medical field. He is outstanding in his clinicals. He really sets the standard.”

“We answer 911 calls in Brown County and take transfers across the state,” he said. “I can work on classwork between calls. I have to push through it. It’s a grueling schedule with school and clinicals.”

Michael’s clinical work was in Abilene and split between ambulance services and hospitals. He said he enjoyed being in the operating rooms the most, learning about anatomy and medical procedures.

“The students learn quality patient care and professionalism that really sets them apart from others,” Young said. “We teach in a flip classroom, which means it is all scenario-based education. It is real world, real-life scenarios from mock phone calls to action in the field. There is an extreme demand for paramedics, so much so that they are being offered hiring bonuses.”

Michael will be among the first Emergency Medical Services students attending classes in late August in the new Industrial Technology Center at TSTC in Abilene. The EMS program is relocating to the new building from the East Highway 80 campus in Abilene.

“Right now I am at another stepping stone to be a flight medic,” said Michael. “I could not have picked a better college.”

Michael is a 2000 graduate of Comanche High School. 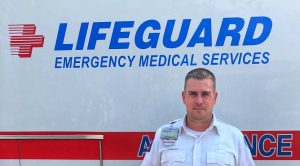