“We’re especially proud that the Del Rio community values the work that we do and entrusts their students to us,” said TSTC Provost Adam Hutchison. “It’s a relationship that we intend to keep strong for many years to come.”

Brenden Paradis, 19, is one of at least 15 Del Rio students who were enrolled during the fall semester in TSTC in Waco’s Welding Technology program. He just finished his third semester in the program.

“The reason so many come here is because our (Del Rio High School) welding instructor, Tod Townsend, pushes us beyond high school and to get a college education,” Paradis said.

Knowing that many of Del Rio’s welding students have enrolled at TSTC since the late 1990s, as estimated by TSTC faculty members, made going to college easier for Paradis.

“All of the guys, at first, room together, but after the first year a lot tend to go out on their own,” he said.

Paradis became interested in welding after attending a job fair during his freshman year of high school. He was impressed with sculptures on display that were made by welders.

“I would tell (other) students to really think about their future before their senior year comes up,” Paradis said. “If you haven’t decided on something, it makes it difficult to pick a path to go down.”

After graduating in 2019 from TSTC, Paradis plans to take a summer advanced pipe course on campus and then work in custom fabrication.

“We want our students to graduate with more than a high school diploma and be future-ready,” Gonzalez said. “The school district continues to invest and expand the CTE program with the use of technology and industry equipment to better prepare our future graduates with expansion of industry certifications and dual-credit opportunities.”

Gonzalez said the students in Del Rio’s welding program build strong relationships with one another, making the transition to college a little easier.

“It seems TSTC is the destination for most of our welding students due to its excellent reputation within the welding community,” he said. “Our welding students never leave us, at least not entirely. Every chance they get, they come to our welding class and share their positive college experience with our current high school students. I believe the reputation and the bridge established between TSTC and our welding program is evidence of our current and future success.”

One Del Rio resident has started what he hopes is a new tradition for Val Verde County students attending TSTC.

Andres Hernandez, 19, of Del Rio finished his first semester in the Automotive Technology – Toyota Technician Training and Education Network, or T-TEN, specialization program. He is among the first generation in his family to go to college.

Hernandez said he has enjoyed the different teaching styles he encounters at TSTC and knowing more about automotive electrical systems.

Hernandez became interested in automobiles when he was a child because of his father, a mechanic. He learned about TSTC when a recruiter visited his high school when he was a sophomore.

“I knew most of the welding students go here (to TSTC),” Hernandez said. “It helped me because I would know some people here.”

Hernandez said he misses his family occasionally but enjoys living on campus. When he is home for visits, he gets work experience as a lube technician at Toyota of Del Rio. He said he also works on tire rotations and other routine maintenance. 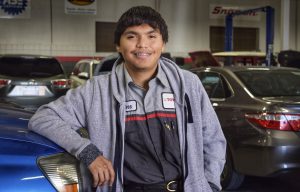