(RED OAK) – The work that James R. “Jim” Pitts did while a member of the Texas House of Representatives is solidified for future students that walk through the building now bearing his name at Texas State Technical College in North Texas.

The Jim Pitts Industrial Technology Center was formally dedicated Thursday morning at a plaque unveiling ceremony attended by Waxahachie and Ellis County leaders along with TSTC administrators and staff members.

Pitts said he appreciated the honor and that TSTC in North Texas is in a great location in proximity to the Dallas – Fort Worth area.

“I’m thrilled to see something you dreamed about become a reality,” Pitts said.

Pitts was a Republican member of the state House of Representatives representing House District 10 from 1993 to 2015 and was chairman of the House Committee on Appropriations. He was named one of the state’s 10 Best Legislators by Texas Monthly magazine in 2005, 2009 and 2013.

“I miss the legislature and I miss doing good things for Ellis County,” Pitts said.

TSTC Chancellor and Chief Executive Officer Mike Reeser said he first met Pitts during the 2013 Texas legislative session. Pitts told him he had a goal of bringing technical education to the county’s residents to become contributing members of the workforce.

During the session, Pitts introduced legislation that was sponsored by Sen. Brian Birdwell authorizing the creation of a TSTC extension center in Ellis County. The extension center evolved in less than a year into today’s stand-alone campus. After a land deal with the Red Oak Independent School District, the building on North Lowrance Road formally opened in October 2014 and now houses the technical college’s 10 programs.

“He is your neighbor,” Reeser told ceremony attendees. “You had a guy who went to Austin and fought for your best interests in Ellis County.”

Pitts is a former member of the Waxahachie Independent School District Board of Trustees. He is an attorney and owner of Ellis County Abstract and Title Company in Waxahachie.

After the ceremony, The TSTC Foundation hosted a luncheon and visitors took building tours. 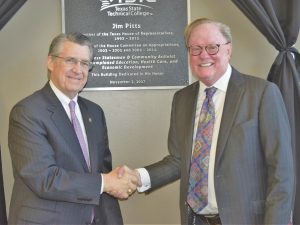