(ABILENE) – Stephen Heckler is glad to be home.

Heckler, 20, began work earlier this month in the network operations center at Acumera, a network-managed service provider in his hometown of Austin. He earned an Associate of Applied Science degree in Computer Networking and Systems Administration from Texas State Technical College in late April.

“It’s going to be a great opportunity and a lot to learn,” he said. “It seems like a really good fit for what I want to be doing.”

Phil Stolle, director of Acumera’s network operations center, said it is a challenge finding qualified applicants with customer service skills and technical training who can work nontraditional yet flexible hours.

“Candidates who have real-world experience along with a course of study in networking/IT from TSTC are great candidates,” Stolle said. “In the specific role as a network operations center technician, it is a great opportunity for those looking to put their degree to use. One thing that I think candidates are really attracted to is that interviewing with Acumera is the opportunity to go deep in the field of network management.”

Heckler was home-schooled and attended private schools while growing up in Austin. When he was 8, he crashed his father’s computer. When Heckler was middle school-age, he searched online for a computer he could afford with his allowance.

He said college was not an option at first because he wanted to be a mechanic or work on computers because of his interest. He said TSTC exceeded his expectations.

“I have relatively good time-management skills already,” Heckler said. “It was not a big deal to go to class once or twice a week with a lab section and make sure the homework got done.”

He went to TSTC’s Abilene campus because his fiance is attending Abilene Christian University.

“I did not want to do theory and programming,” Heckler said. “TSTC was a good fit. I feel like I am prepared for work. I pushed and worked on the assignments, so if you put in the effort, you do learn a lot.”

Leo Chavez, an instructor in TSTC’s Computer Networking and Systems Administration program, said Heckler showed a lot of passion with his learning and spent a lot of time in the program’s combined classroom and lab.

“It is validation for the program since we certainly teach toward the smaller areas, like Abilene and Sweetwater,” Chavez said. “It says a whole lot about the things we teach in that you can take that and pivot to an Austin, and make it work well.”

Heckler said Chavez was an integral part of his success at TSTC and in finding a job so quickly after graduation.

“He has a way of communicating his passion for the material and getting the students excited about that,” said Heckler. 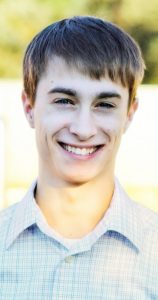