For Ronnie Pitts, an instructor and statewide department head in the Emergency Medical Services program at Abilene, watching his students achieve their educational goals does not get tiring. It was especially significant when one student bestowed upon him an honorary Phi Theta Kappa stole as a thank-you.

“This is the event that makes everything we do as instructors worthwhile,” Pitts said. “Being able to watch our students succeed is what we live for. But, to be given this honor on top of it all is a special recognition that I greatly appreciate.”

Students could be found thanking their instructors and excitedly talking about having accepted job offers.

“I worked in the oil field after the Army and saw that there was a way to make good money while staying clean and dry,” Russell said. “So now I get to do what I enjoy and be comfortable.”

During the commencement ceremony, Julian Alvarez III, the commissioner representing labor with the Texas Workforce Commission, encouraged students to be humble in their success and spend time with successful people.

“You will face careers, not jobs, the rest of your life,” Alvarez said.

Alvarez is a first-generation college graduate. He said that, just like TSTC did for him when he was a student, the graduates have received the tools needed to think for themselves.

“You are ready to meet those challenges you will face in the workplace,” Alvarez said.

Many of Monday’s graduates were inspired and led to success by family members.

Mary Mares of Brownwood, who earned an Associate of Applied Science degree in Nursing from Sweetwater, said it was her son who inspired her to pursue her degree.

“My son was born with craniosynostosis, and it was his birth that motivated me to get this degree so I can help him and others to the best of my ability,” Mares said.

Phillip Cruz of Sweetwater received an Associate of Applied Science degree in Wind Energy Technology. He said his 6-year-old daughter was his inspiration for pursuing his studies.

“It’s a second career,” Cruz said. “I used to be a police officer. The country is changing to green energy. I figured I would help the country move forward.”

Cruz is considering job offers at energy companies in Michigan and Texas.

Earlier in the day, the Nursing programs held pinning ceremonies for graduates in Abilene and Sweetwater.

For more information, go to www.tstc.edu. 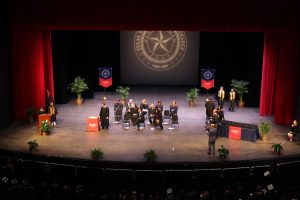